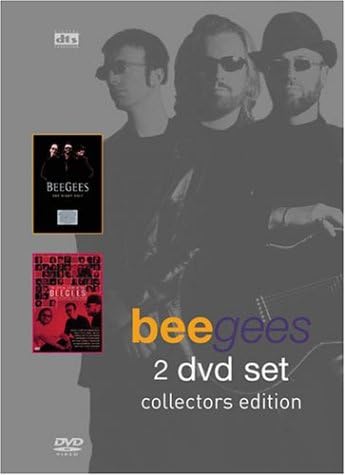 One Night Only (DTS)
Taped as a lavish cable television special in 1997, One Night Only trades on the Bee Gees' shape-shifting career as pop survivors. Over the course of 111 minutes, this straightforward concert, produced at the MGM Grand in Las Vegas and groomed for both video and CD posterity, sprints through 31 songs from their past three decades. Even after the inevitable disco jokes are expended, and the jaundiced viewer contemplates the role hats, hairspray, and comb-overs now play in dressing the once stylishly long-haired troika, the Gibb brothers' signature vocal harmonies and hook-laden song craft beg respect. Casual listeners can't be blamed for equating the Bee Gees with the dance floor bonanza they reaped through 1978's Saturday Night Fever, yet that commercial zenith was actually the culmination of a comeback for a group that had seemed washed up by the early '70s. "i"One Night Only thankfully takes an even-handed view of both their original late '60s hits ("Massachusetts," "To Love Somebody," "Lonely Days"), building from a cannily Beatle-browed vocal sound, and the '70s blue-eyed soul ("Jive Talkin'," "Nights on Broadway") that led them naturally into disco. The Fever hits are here, as are Gibb originals that clicked for other acts; the family circle also widens for a posthumous duet with their late brother, Andy Gibb, while Celine Dion gets star billing in the collaborative "Immortality." --Sam Sutherland

This Is Where I Came In: The Official Story of the Bee Gees
There have been a lot of durable family groups in popular music over the years, but it would be hard to name one that has lasted longer, and succeeded as consistently, as the Bee Gees. Barry Gibb and his younger twin brothers, Robin and Maurice, were making TV and radio appearances in Australia as early as 1960 before returning to their native England and joining the Beatles-led British Invasion, and they're still at it more than 40 years later. All of that is duly chronicled in this two-hour documentary (produced in 2000), along with a great deal more: the personal problems that led to a breakup in the early '70s; the unparalleled success of the Saturday Night Fever era; their occasional missteps and failures (e.g., the abominable Sgt. Pepper movie); the rise and tragic fall of brother Andy; the respect their success finally earned them in the '90s; and so on. The format is pretty standard; interviews, photos, home movies, and concert footage all contribute to a straight, chronological telling of the Bee Gees' tale. But no stone is left unturned, and the Gibb Brothers (not to mention everyone else who's interviewed) have plenty to say. Best of all, there's lots of the Bee Gees' music, including a video of the title track of the 2001 album This Is Where I Came In, after which the film is named. In the end, we're left with the impression the Bee Gees would probably want us to have: that these guys have written, recorded, produced, and performed literally hundreds of great songs. "i"--Sam Graham

Allies: Real Talk About Showing Up, Screwing Up, And Trying Again